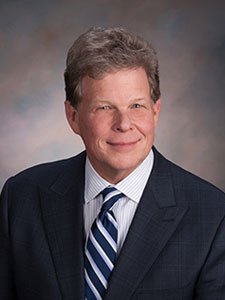 John began private practice in Scottsbluff, Nebraska where he became partner in the firm of Simmons, Olsen, Ediger, Selzer & Ballew P.C. In 1991, John moved back to Lincoln and became associated with Baylor, Evnen, Curtiss, Grimit & Witt. In 1995, John and M.J. Bruckner formed The Bruckner/Ballew Law Firm, P.C. before he and Vic Covalt decided to form this firm in 1999.

Over the past thirty years, John has concentrated his trial practice in the areas of personal injury along with complex and high asset divorce cases. He is one of only eleven Nebraska lawyers admitted to the American Academy of Matrimonial Lawyers (AAML) and is one of only two lawyers in Nebraska who is both a Fellow in the AAML and Board Certified as a Family Law Trial Lawyer by the National Board of Trial Advocacy. John has been recognized by his peers for inclusion in The Best Lawyers in America© consecutively since 2001 for Family Law. He received the Best Lawyers® Family Law “Lawyer of the Year” in Lincoln for 2013, 2016, 2018 and 2021. In 2007, he was recognized by SuperLawyers.com as one of the top lawyers in Nebraska.

John coached two championship high school mock trial teams while in Scottsbluff. He also received the first Robert M. Spire Pro Bono Award given by the Nebraska Bar Association in 1986 for his efforts in representing low-income clients. He has chaired both the Family Law and Bankruptcy Sections of the Nebraska Bar Association and has been a frequent presenter at a variety of seminars and continuing legal education programs for lawyers and judges. On three occasions his work with state senators has resulted in significant changes to Nebraska law in the areas of divorce practice and bankruptcy.

John has appeared before the Nebraska Supreme Court and Nebraska Court of Appeals more than 40 times in connection with appeals in the areas of divorce and family law, products liability, property taxation and personal injury.

In his spare time, John enjoys scuba diving, as well as singing and playing guitar in his band The Wheezetones.