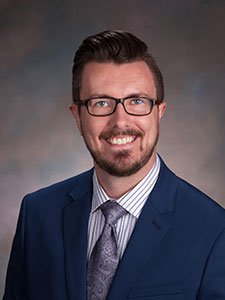 Adam R. Little grew up on a small farm in rural North Dakota, where he honed a strong work ethic and a down-to-earth attitude. Adam received a Bachelor of Science Degree in Biotechnology and a Bachelor of Arts Degree in Political Science from North Dakota State University in Fargo, ND in 2008. Adam remains an avid supporter of the NDSU Bison.

After graduating from NDSU, Adam relocated to Lincoln, Nebraska to attend law school at the University of Nebraska College of Law.  Adam received his Juris Doctorate Degree in 2012 and completed a Program of Concentrated Studies in both Intellectual Property and Space, Cyber, and Telecommunications law.  While in law school, Adam was involved in the Student Bar Association, was a founding member of the Student Intellectual Property Law Association, competed in the Grether Moot Court and Allen Moot Court competitions, as well as the ABA Mediation, Client Counseling, and Arbitration competitions.  Adam was also a member of the UNL National Moot Court Team, reaching the regional semi-finals, and the Manfred Lachs Space Law Moot Court Team, which finished as national semi-finalists.  Adam has volunteered his time coaching the Lachs Team since 2015.

Adam joined the firm as a clerk in November 2012 and was hired as an associate in January 2013.  He is licensed to practice in Nebraska, as well as the United States District Court for the District of Nebraska. Adam’s expertise in cyber law and technology issues carries over into his practice, as well as his knowledge and experience in agriculture.  Adam focuses his practice on civil appellate litigation and family law matters, including a focus on farm divorces.

Adam is known for his sense of humor around the office and his extensive array of colorful socks to match any occasion.  In his spare time, Adam is a competitive cosplayer and attends several comic cons annually.  He also enjoys golfing and spending time outdoors, especially on the family farm.